Since January, while school closures and government restrictions on sport and social gatherings have meant sporting activities have not taken place, BPF Malawi’s development officer Wordsworth Rashid has been coordinating educational workshops on Covid-19, running 138 community sessions, promoting key health & hygiene messages. Wordsworth has also delivered hundreds of buckets, soap bars and masks – all in an effort to help protect individuals and their families from the dangers presented by the pandemic.

BPF Malawi’s Mtema sports & education community centre construction project continues to make excellent progress as the build schedule nears completion. Consultant project manager Tim Mahoney and his team of staff on-site are focusing on Phase 2 of the clubhouse, including the canteen, kitchen, store room and two classrooms. The roof is soon to be installed. The manager’s house is complete, a vegetable garden has been planted, a tree regeneration initiative is underway and the grass on the sports pitch is being regularly mown as the rainy season has encouraged root growth.

Work continues on Phase 2 of the clubhouse, the pitch gets greener and greener, and communities receive coronavirus support through resources and education.

In Arusha, schools reopened on 11 January. The first community rugby practice took place this month where development officer Juma Kittyler started coaching seniors in preparation for a local fixture (but was subsequently postponed). Of the 77 sessions involving 4,369 boys and girls in January and February, Saturday meals were provided twice a month, where children enjoyed bananas and bread in the morning and rice, beans, meat stew, egg and vegetable for lunch.

Coach (and former player) Mathayo was successful in his application to join Malya College in Mwanza. Coaches Baraka and Joshua are continuing their studies at the Umoja Centre.

In line with government restrictions, Juma and his team of committed sessional coaches lead rugby and yoga activities.

“The food program it is a good thing and it is so advantageous because most of the children come from low income families and, sometimes, even getting breakfast before coming to training is a challenge. Therefore, providing food helps by a large percent… Also, from my side, it is a sign that the charity cares a lot for the players.” 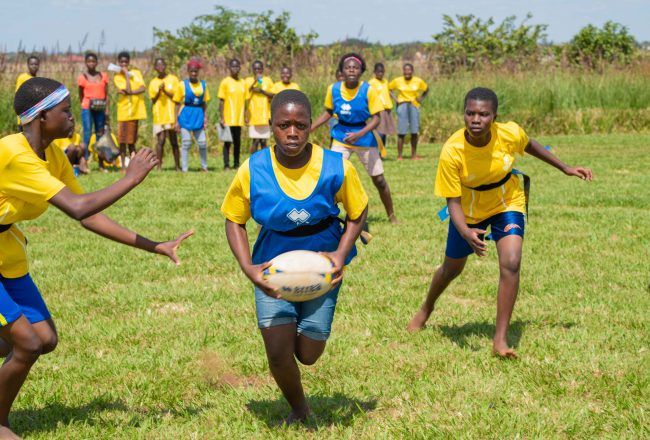